Welcome! I'm a writer and editor who reports on innovative people, interesting cultures,
and faraway places. 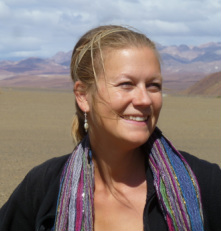 My articles have been published in several anthologies and magazines, including Afar, Islands, National Geographic Traveler, Garden Design, Sport Diver, and on nationalgeographic.com. I've worked as a contributing editor for Islands, an associate editor at Sport Diver, and a freelance editor at Via. I was also a senior editor at Afar, which launched in 2009. The magazine won the 2010 Lowell Thomas Travel Journalism Award for the best travel magazine in the United States.

I grew up in Lincoln, Nebraska, where my wanderlust first sparked. I made detours on my way home after kindergarten, looking for the route with the maximum amount of violets growing by the sidewalk. I spent hours gazing at David Attenborough's book Life on Earth, amazed at a picture of a cliff in Peru covered with the rainbow feathers of macaws. Later, I read books by authors from other countries--Gabriel García Márquez, Nadine Gordimer, the Brontës--and was transported to Colombia, South Africa, and the drizzly moors of England. Nebraska has a strong sense of place, too. Willa Cather helped me to see that.

In 1995, I left home for college, first at the University of Kansas, and then at Stanford University. After graduating with a bachelor's degree in English, I hit the road with my husband-to-be, Michael Vance, whom I met at Tuolumne Meadows in Yosemite National Park. We worked at a restaurant just outside Denali National Park in Alaska, and then in Yellowstone. I saved money for a solo trip to southern Mexico, Guatemala, and Belize. The routine was set: work, save money, travel, repeat. Since then I've been to about 70 countries and have learned to combine my passions for writing and exploring the world into a career.

I've recently returned from a nine-month trip to Africa, the Middle East, and Europe, which I wrote about on my Happy Travels Blog. Now I'm working part-time as a social media strategist at Wilderness Travel and writing part-time from our home in Oakland, California.